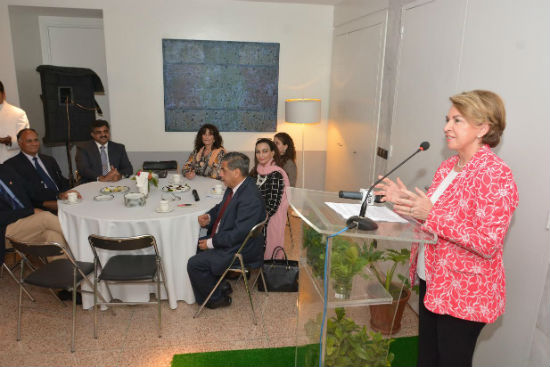 The Ambassador of France to Pakistan, H.E. Mrs. Martine Dorance, hosted an event on the 14th of March, 2016, to mark International Women’s Day, after weeklong celebrations.

The debate, which focused on “Women and Climate Change”, gathered almost a hundred representatives from the political world, Parliamentarians, government officials, prominent activists and members of the civil society, journalists, diplomats and UN representatives, as well as women representing the voices of the mountain communities.

More than 100 days after the historical achievement of a universal agreement on climate change in Paris, the Ambassador made a call to sustain the momentum terming 2016 as the “year of action and implementation”.

Emphasizing the fact that women were “primary victims of climate change, but also often the main source of solutions”, Ambassador underlined the need to “place women at the core of national and local climate strategies and at the heart of international climate negotiations”.

Apart from raising awareness on this subject, the event, she said, was aiming at presenting an often forgotten face of the Women of Pakistan, women who fought for their ideas, women who were carpenters, women who climbed the Everest at the age of 21, referring to the special participants in the audience.

Among many outstanding Pakistani voices, like Dr. Shoaib Sultan Khan or Mr. Malik Amin Aslam, the keynote speakers shared their comments on these issues : 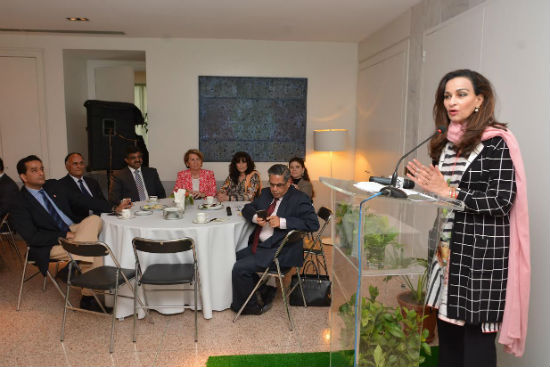 Senator Sherry Rehman appreciated the “call for action” initiated by the Embassy of France on this fundamental topic which was not a “niche subject” but would impact the lives of all Pakistanis. She underlined the enormous risks climate change was posing in terms of daily security and resilience in Pakistan, “incubat[ing] exclusion, sharpen[ing] gender inequalities and reduc[ing] access to education as well as affecting production”, when the “producers of the country [were] primarily for women”. She emphasized the need for a “national conversation” at the political and parliamentarian level on climate change, which would need to include women. 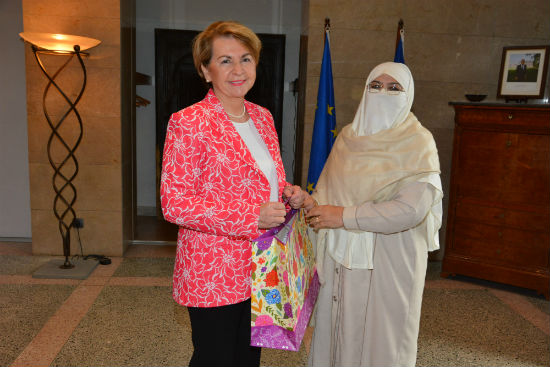 Major General Asghar Nawaz, Chairman of the National Disaster Management Authority (NDMA), underlined the sheerness of the impacts climate change was having in Pakistan and its high vulnerability, as “75% of disasters were linked to meteorological causes” throughout the country (“floods, droughts, heat waves, glacier’s melting, avalanches and landslides, new tropical cyclonic activities in the Arabian Sea”). He insisted on the need to focus on the most vulnerable groups, particularly women, and on the importance of awareness and education. NDMA was strongly committed in that sense, was now conducting surveys with disaggregated data and had set up a special Gender and Child Cell.

Mrs. Aisha Khan, CEO of the Mountain and Glaciers Protection Organization (MGPO), called for the strengthening of a new “civil society platform” aimed at helping the government to tackle climate change in Pakistan, taking forward a broad-based dynamic started last year. She called to expand the outreach, build alliances, consolidate gains and accelerate the momentum to sensitize all stakeholders about climate change. She underlined that “climate risk management can never be successful without social equity, equitable distribution of resources and proportionate representation of women in decision making.” 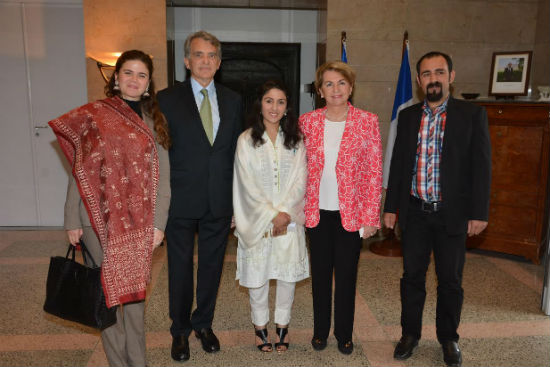 Mrs. Aqeela Bano and Farman Ali, two young women who have been trained in a skill development project of carpentry, masonry and electrification, developed in Hunza and Chitral by the Aga Khan Cultural Service (AKCS) with the support of the Embassy of France in Pakistan, also talked of their experience during COP21 as they represented Pakistani feminine voices in the Paris Conference. Ms. Aqeela Bano, Surveyor of the project spoke about the challenges and success of young entrepreneurs from her area and how their participation to the COP21 Climate Conference had given them new ideas of wooden house construction. She said “women can achieve anything they want”.

Mrs. Samina Baig, famous alpinist, first Pakistani woman to climb all seven summits in the world, climbing the Everest at the age of 21, made a strong and inspiring speech. She termed climate change “a bigger threat than terrorism”. She gave her fist hand testimony of glacier melting all over the world and in the summits of Pakistan, saying she got surprised last year while climbing the K2, seeing that “snow had barely frozen at 6000m”. She called for action in face of this alarming situation.

Mr. Ali Tauqeer Sheikh, CEO of LEAD Pakistan, termed the COP21 “another French Revolution” and “regret[ted] this debate was not happening in the national and provincial Parliaments”. He insisted on the importance of tackling climate change, one of the three most important challenges for Pakistan and the world, and underlined the need to include gender approaches to the policies. He called the Parliaments to give budgets to mitigate and adapt to climate change and asked media to engage in raising awareness on the subject./. 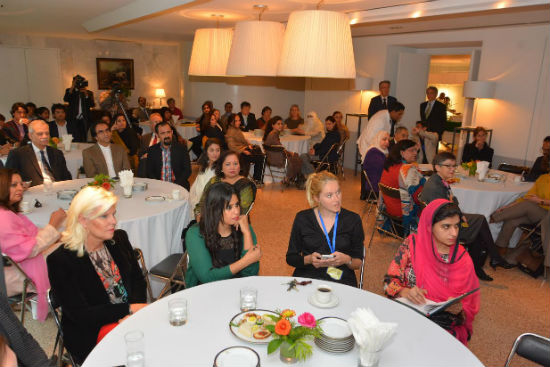 DEBATE ON “WOMEN AND CLIMATE CHANGE”

We are today gathered on the occasion of Women’s International Day, whose celebration, given the importance of the topic, extends now to several days, or even weeks.

When talking about gender, we often think of women’s empowerment and opportunities, be it through education, in the economy, in the political or media world. More and more also, and this is something new, new in Pakistan but also in most countries in the world including mine, when talking about gender, we need to talk about the links between women and climate change and environment.

In the past few months, I am very pleased to have seen a raising awareness and action regarding climate change in Pakistan. Your presence here today confirms it and honours us. Through the actions of many of you gathered today, and, I want to underline, especially women, things are moving: an exceptional civil society mobilization during and after the COP 21; Parliamentarian debates and initiatives such as the complete solarisation of the Parliament in Islamabad, the first in the world; the recent tree planting campaign launched by the government; the raising awareness within the media which now reports on climate change on a very constant basis.

Who else but you can better talk about this topic? I also think of the women on the ground, the women who live in the mountains and are here today, in direct contact with nature and the impacts of climate change.

Women and gender held a crucial role during the COP21, the Conference on Climate Change which was held in Paris in December last. As you know, the event was inaugurated by a great number of heads of state and government, among them the Prime minister of Pakistan, Mr. Nawaz Sharif. During this 10 days Conference, there was even a day dedicated only to Gender. The Paris agreement itself in its recitals underlines that, “when taking action to address climate change, [countries will commit] to respect, promote and consider gender equality and empowerment of women”.

Why is this so important? Firstly, women are the primary victims of climate change, for it is poor communities that are the most vulnerable and suffer the worst of its impacts, and women make up 70% of those in poverty throughout the world.

According to the UN, when a natural disaster strikes a region, the risk of death is 14 times higher for women, mainly because they are not targeted as a priority by disaster warning and prevention programmes.

Climate change also increases the number of constraints on women, who are responsible, in many regions, for providing food, water and fuel for their families. Another worrying fact is that these constraints result in too much household work, which often leads to girls dropping out of school.

It also entails consequences on health, and reproductive health especially.

As the primary victims of climate change, women are also often the main source of solutions. As development experts duly highlight, a climate change programme designed without taking women into account is less effective than the same programme planned with them.

In light of these facts, one thing is certain: women must be placed at the core of national and local climate strategies and at the heart of international climate negotiations.

As France is currently holding the presidency of COP21, it will ensure that.

Since the historical achievement of a universal agreement on climate change, in Paris, about a 100 days ago, we now need to sustain the momentum.

While 2015 was the year of negotiation and mobilization, this 2016 should be that of action and implementation.

In Pakistan, France will stay committed and expand its actions of cooperation and will continue to organize a series of events to raise awareness:

the French Agency for Development, AFD, which currently focuses mainly on green energy, especially on hydroelectricity, will expand the scope of its projects particularly in climate change mitigation and adaption throughout the year;

France is supporting the creation of a civil society platform, "a climate change coalition", to gather forces and expertise in the subject, and I am happy to see many of its members present today;

France is also helping to build scientific bridges, between, for example, the Pakistan Meteorological Department and Meteo France, and is in the process of helping to create a “Pakistani IPCC” (Intergovernmental Panel for Climate Change), a scientists platform working exclusively on Climate change.

Several events will be organized during the course of the year to raise awareness:

Among others, a second big moot on climate change will be organized as a follow up to the Climate Change Lahore Forum, before the COP22, which will take stock of the Paris conclusions and look at the new commitments of Pakistan, which has promised a new INDC (intended nationally determined contribution);

Awareness in schools will be continued, especially through the painting competitions organized by the government in the whole of Pakistan;

Trainings sessions on climate change for a diverse public will be prolonged.

I am sure the debate today will be of high quality. Its aim is to raise awareness on the subject, be it from a more political and institutional perspective, in the first part of this event, as eminent speakers, Senator Sherry Rehman and the Chairman of the National Disaster Management Authority, General Asghar Nawaz, will share their expertise and ideas with us.

Or be it from a civil society perspective, starting with the CEO of Mountain and Glaciers Protection Organisation, Mrs. Aisha Khan, who was in Paris during the COP21, or Mrs. Aqeela Bano and Farman Ali, both from Hunza, who lead the carpentry program supported by France together with the Aga Khan Foundation, and also went to Paris to represent the feminine voices of Pakistan. I am glad also to have among us Mr. Ali Tauqeer Sheikh, CEO of LEAD Pakistan, who will conclude the session today, as a follow up to a first workshop held on the same topic three weeks back at LEAD.

Finally, let me conclude by saying this event is also aimed at presenting another face of the Women of Pakistan: women who fight for their ideas, women who are carpenters, women who climb the Everest at the age of 21 and the seven summits in the world. Let me here give a special thank you to Mrs Samina Baig for her presence and voice among us.

To all, I wish a fruitful debate!