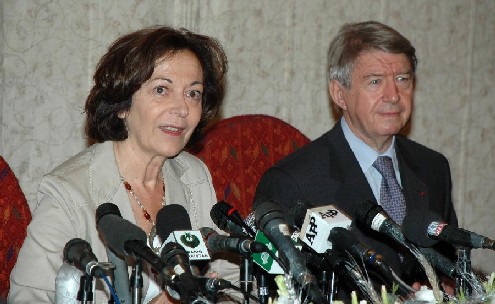 Anne-Marie IDRAC, French Minister for Foreign Trade, along with a delegation of French companies, has arrived today in Pakistan to visit Islamabad and Lahore.

Ten weeks after the visit of President Asif Ali Zardari in Paris, Anne-Marie IDRAC will reaffirm France’s commitment in favor of Pakistan’s development. The Minister will call on President Asif Ali Zardari and Prime Minister Yusuf Raza Gilani and will meet her counterpart Hina Rabbani Khar. In Lahore, the Minister will meet with Chief Minister Punjab, Shabbaz Sharif and the Pakistani and French business communities.

“France wants Pakistani democracy to succeed. This requires security, fight against terrorism and economic development. France wants to be a prominent partner for Pakistan in those areas. Transport, energy, water treatment and the food sector are priority sectors for the development of Pakistan and all correspond to a strong French know-how. ”, Anne-Marie Idrac said before leaving for Pakistan.

On the occasion of the Conference of the “Friends of Democratic Pakistan” during which 27 countries and 16  International Organizations gathered in Tokyo on April 17, 2009, France has pledged a 300 million euro assistance package over three years. This assistance will be channelled through the French development Agency (AFD) that included Pakistan in its operations after the 2005 earthquake and opened an office in the country in 2007.

In 2008, the global volume of trade between France and Pakistan reached 880 million euros, growing by 6% compared to 2007. There are currently 35 French companies present in Pakistan.