Athletes from around the world will be converging on Russia for the 2014 Winter Olympics. There are high expectations for this sporting event, whose organization has drawn upon French expertise and know-how. 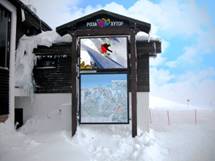 Olympics, the country did not have the equipment needed to host such an event. The Russian authorities had to build two major sites dedicated to this exceptional event. To rise to the challenge, the organizers notably called upon French alpine specialists. France has impressive skiing facilities, and the managers of French ski resorts are proud to organize the most beautiful and spectacular competitions. This expertise has been built up over some 40 years, with the creation and operation of numerous ski resorts including La Plagne, Tignes and Courchevel.

Thanks to the expertise of French companies, as well as contractors from Canada, the USA, Austria and Italy, the project was completed on schedule. These Olympic Games have already beaten one record with their $36 billion budget.

“The Russians called upon us for the Olympic Games because we had already restructured small ski resorts there in the 1990s. But in Sochi, we had to create everything from scratch”, says Benoît Robert, Director of Cluster Montagne, a body responsible for promoting French mountain development actors. According to Cluster Montagne, the turnover achieved by French companies in Sochi could reach €500 million.

Present at every stage of implementation and operation

For the Sochi Games, French companies have been involved in every stage of the skiing facilities and their operation. the company Poma, for example, has had to build 16 mechanical ski lifts in five years. Yet another performance for this internationally renowned company. Poma is so well known in American winter sports resorts that skiers call detachable services lifts “Poma lifts”.

For the Atos group, a historic partner of the Olympic Games, no less than 3000 people have been involved in preparing the Sochi Olympics over four years, ensuring the management of the competition’s whole computer system, from journalist accreditation to timing of trials. MND Group (Montaigne et Neige Développement) was also selected by the Russian organizers, in particular for its exclusive explosive-free avalanche release system. “For internal security reasons, Russia can’t use explosives. They were confident in our remote-operated gas mix system, which creates avalanches through a blast”, according to Roland Didier, the company’s Deputy General Manager.

With a €500,000 budget, the real-time information systems and interactive piste maps have not been forgotten, even if they are essentially designed for future use of the sites. The Olympic resort Rosa Khutor thus entrusted displays and smartphone applications to the company Lumiplan. “Our presence on the Sochi project is a

Alpine skiing is well represented in the Winter Olympic Games. This is why the organizers also selected French expertise for the operation of the resort where these trials will take place. It is the Compagnie des Alpes group, which in under 15 years has become a major player in Europe’s leisure industry, that will manage Rosa-Khutor’s skiing facilities. In addition, tenders have been won by subsidiaries of major French groups including Cofely Ineo (GDF Suez), which was selected by the Russian organizers to run the image and light shows during the opening and closing ceremonies of the Sochi Olympic and Paralympic Games.

And in the future…

The adventure will of course not come to an end for French companies with the closing ceremony on 20 February. "By 2020, Russia hopes to clock up close to 20 million annual skier days, compared to three million currently”, according to Benoît Robert. “We still have work to do, training personnel and operating and maintaining facilities." The presence of French contractors in Russia also opens the way towards former Soviet republics in the Caucuses, Kazakhstan and Mongolia. “French companies need to continue promoting their expertise”, says Benoît Robert.

But Cluster Montagne is already looking to the 2018 Olympic Games in Korea, and even those of 2022. “Six countries have already applied, including China, Kazakhstan and Poland. We are participating in consultations and already proposing our services”.