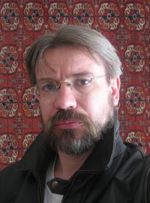 Stéphane A. Dudoignon is a Senior Research Fellow in the National Centre for Scientific Research (CNRS) of France and a Lecturer at the School of Advanced Studies in Social Sciences (EHESS) of Paris.

His major theme of interest is the history of modern-day Islam in the former Russian Empire and in the Middle East, with special interest in the connections and exchanges between the Iranian and Turkic worlds and South Asia.

He has recently edited Allah’s Kolkhozes: Mass-Migration, Destalinisation, Privatisation and the Muslim Congregations in the Soviet Realms (1950s-2000s) (Berlin: Klaus Schwarz, 2014) and written Marginal Hegemons: The Baluch, Sunnism and the State in Iran, from Riza Shah to Khaminayi (1928-2013) , forthcoming.

Interactions between the Iranian and Indian Worlds in the Religious Field, in Modern Times By Stéphane Dudoignon Wednesday 20 May - Alliance française - Conference Hall - 6:30 pm

Among the non-Arab centres of gravity of Islam, the Iranian and Indian worlds have been united, since the eleventh century CE, by an exceptionally wide typology of interactions and exchanges. In modern times especially, from the sixteenth century onwards, population movements between Central Asia, the Iranian plateau and the subcontinent have permitted the diffusion of the most varied trends of Islamic dogma and practice, as well as their mutual influence as suggested by the history of Sunni and Shia Islam throughout these universes. In later centuries, the political instrumentation of confessional persuasions (ar. madhahib) under the Safavid, Mughal and varied Central Asian polities helped structure modern ethno-religious identities, while strengthening interconnections at continental scale.

From the seventeenth century onwards, the propagation of the Mujaddidi gnostic learning from the Ganges Valley to Transoxiana and Khurasan permitted the appearance and development of reformist movements that further reached the ancient Islamic settlements of the Volga-Ural region, in the heart of the Russian Empire. In the twentieth century, the diffusion westwards of the Deoband School and, since the 1920s, of the Tablighi Jama‘at has been strengthening an interregional Sunni religious field that covers now, through centralised and hierarchized nexuses of higher religious schools, a wide area that encompasses Pakistan, Afghanistan, Iran’s eastern periphery up to the Turkmen-peopled districts of the Caspian shore, part of former Soviet Central Asia and Central Asian migrant colonies dispersed throughout the Russian Federation, from the suburb of Saint Petersburg to Manchuria.

Backed by the equally transnational networks of the traditional gnostic paths, these nexuses of madrasas have been submitted, in turn, to a range of political utilisations. Conversely, they have also emerged as a leading actor in a political field that has become dominated, since the early twenty-first century, by non-state protagonists.