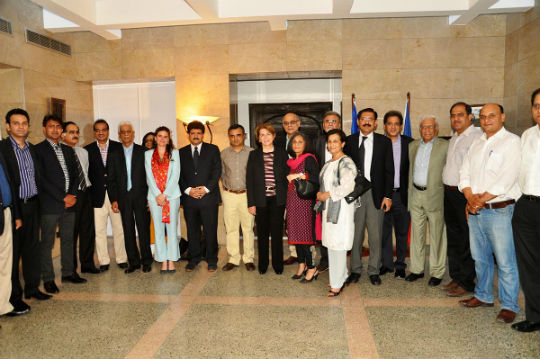 H.E. Mrs. Martine Dorance, Ambassador of France to Pakistan, hold a reception in honor of media representatives on Thursday 7th May 2015 at the Residence of France.

Celebrating the World Press Freedom Day, the Ambassador acknowledged the importance and the quality of a vibrant media in Pakistan, welcomed its plurality and diversity, and insisted on the support of France to an independent media and the freedom of expression, fundamental for the Pakistani democracy.

Among other priorities, the Ambassador insisted on the preparation of the COP21, Paris Climate Conference which will be held in Paris in December. The success of this conference is of a vital importance for our common future. Its aim will be to reach a universal agreement that will limit the rise in average global temperatures to 2 degrees Celsius, by the end of the century.

As one of the most vulnerable countries to climate change, Pakistan has a very important role to play in these negotiations and a voice to raise in Paris at the end of this year. She encouraged her invitees, as prominent and influential members of the media community, to play a pivotal role to play to sensitize the Pakistani public throughout the year./.