Paris Summit of Conscience for the Climate

On Tuesday, 21 July 2015, in the run-up to the 21st Conference of the Parties (COP21) to the United Nations Framework Convention on Climate Change (UNFCCC), to be held in November-December 2015, a “Summit of Conscience for the Climate” took place in Paris. 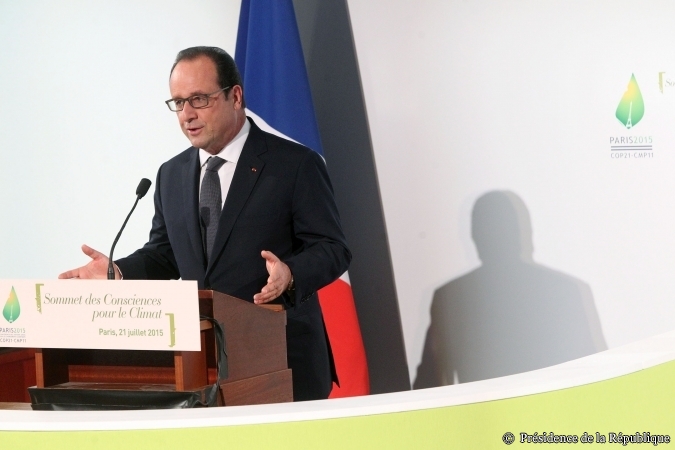 Paris Summit of Conscience for the Climate

This Summit was inaugurated by the President of the French Republic, Mr François Hollande, and brought together around fifty influential moral and religious personalities from across the world: high-level religious authorities, scientists, Nobel Laureates, artistes, men and women long committed to the preservation of the environment and building a world that shows solidarity. They appealed for combating climate change, through a “Call to the Conscience for the Climate”.

A dedicated website has been created in support of this event, to gather the accounts and opinions of all on the theme of fighting climate change. Complementing the statements of political decision makers, scientists, CEOs, activists – who are all playing a role and bringing their insights to climate change negotiations – this international campaign will help the voices of “Consciences” to emerge.

Further, the Summit has seen the launch of the “Green Faith in Action” project, a global initiative stemming from a coalition of partners with the objective of rendering pilgrimage destinations of all religious and spiritual persuasions, low-carbon cities resilient to climate disruptions. Three hundred million pilgrims travel to these cities each year.

Summit of Conscience for the Climate:

Launched by Nicolas Hulot, Special Representative of the President of the French Republic for the Protection of the Planet, this Summit is being jointly organized by R20, whose Founder-President is Arnold Schwarzenegger; ARC (Alliance of Religions and Conservation) founded by Prince Phillip; and the French Economic, Social and Environment Council (CESE).

The 21st Conference of the Parties (COP21) to the United Nations Framework Convention on Climate Change (UNFCCC) will take place in Paris in December this year. An effective and equitable international agreement will be critical for reducing greenhouse gas emissions to limit global temperature rise to 2 degree Celsius and for supporting adaptation to climate impacts. France, as the host and chair of COP21, is committed to the role of an impartial facilitator for forging an ambitious agreement at COP 21.