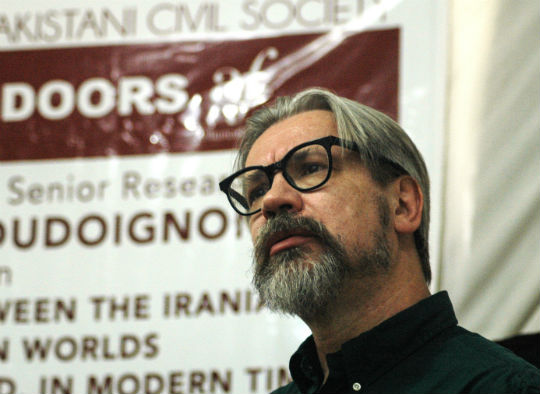 In the framework of the “Open Doors” program jointly led by the Embassy of France and the Alliances françaises of Lahore and Karachi, French researcher Stéphane Dudoignon tours Pakistan and gives several lectures in Karachi, Islamabad and Lahore.

Stéphane Dudoignon is a Senior Research Fellow in the National Centre for Scientific Research (CNRS) of France and a Lecturer at the School of Advanced Studies in Social Sciences (EHESS) of Paris.

His major theme of interest is the history of modern-day Islam in the former Russian Empire and in the Middle East, with special interest in the connections and exchanges between the Iranian and Turkic worlds and South Asia.

He has recently edited Allah’s Kolkhozes: Mass-Migration, Destalinisation, Privatisation and the Muslim Congregations in the Soviet Realms (1950s-2000s) (Berlin: Klaus Schwarz, 2014) and written Marginal Hegemons: The Baluch, Sunnism and the State in Iran, from Riza Shah to Khaminayi (1928-2013), forthcoming.