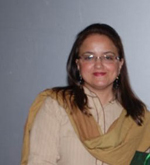 Nausheen H Anwar is Assistant Professor of Urban Studies in the Department of Social Sciences, at the Institute of Business Administration (IBA), Karachi.

She received her PhD from the Graduate School of Architecture, Planning, and Preservation (GSAPP), Columbia University, and has been a former Postdoctoral Fellow at Harvard University and at the Asia Research Institute (ARI), National University Singapore. Her research interests concern the political economy of urban development, migration, governance and globalization in Central/South Asia. She has authored a book and several academic papers. She has also received several grants that center on themes such as gender, inequality and violence, conflict resolution and urban governance, migration, and the political economy of infrastructure development. In her new book, Infrastructure Redux: Crisis, Progress in Industrial Pakistan & Beyond (2015, Palgrave Macmillan), Nausheen explores, through detailed cases of Sialkot and Faisalabad in industrializing Punjab, the double-edged narratives of development that frame infrastructure in post-independence Pakistan. The book looks at how infrastructures such as roads, ports and electricity underpin visions of progress and mediate relations between the state and capitalist firms in export-oriented industrial and industrializing districts in Punjab. Like most postcolonial nation-states, the Pakistani state planned, provided and owned infrastructure, which in the aftermath of independence in 1947 was tied to a mode of rule while promising rapid material progress. But today the state is perceived as having failed to provide infrastructure and is disconnected from local-industrial contexts or superseded by the whims of powerful politicians. For industrialists, infrastructure’s disruptions are perceived and experienced in two ways: first as literal technological collapse that carries high costs, breakdowns and immobility; and second as the loss of a moral order due to political interference.

The main argument is that in the present conjuncture of an infrastructure crisis, the apparent absence of the state in the planning and provision of industrial infrastructure is somewhat deceptive. Although the state is not absent, its presence is reconfigured through a variety of firm-led initiatives to repair and rebuild infrastructures. Folded into patron-client frames, the ensuing state-firm relational engagements for building infrastructure reinvigorate the promise of progress. Furthermore, the strategies of capitalist firms operate within a moral economy in which a pervasive narrative of national moral decline and uncertainty explains the disintegration of a specific type of public infrastructure: electricity. The book straddles the disciplines of history, development economics and anthropology. 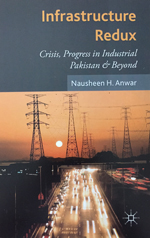 This discussion is based on Nausheen’s book and will tackle the issue of the relationship between infrastructure and industrial development in the 21st century, through the prism of Pakistan’s post-independence history, industrialization, the role of labor, and the present discourse of infrastructure crisis in the context of a globalizing Pakistan. The main concern is how to locate the State in the current conjuncture of an ‘infrastructure crisis’ and to consider the related meaning of material progress in the new millennium.