Message by H.E. Mrs. Martine Dorance, Ambassador of France to Pakistan, on the occasion of the Independence Day of Pakistan, 14th August 2016

Message by H.E. Mrs. Martine Dorance, Ambassador of France to Pakistan, on the occasion of the Independence Day of Pakistan, 14th August 2016 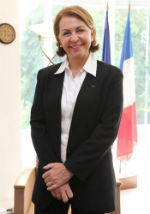 On the occasion of Youm-e-Azadi, it gives me great pleasure to express my warmest felicitations to all citizens of Pakistan. In celebrating the birth of Pakistan, we pay tribute to all of the women and men, first among them the Quaid-e-Azam Muhammad Ali Jinnah, whose vision, courage and perseverance made this achievement possible.

As he took oath as the first Governor General of Pakistan on 15th August 1947, Muhammad Ali Jinnah stated that the creation of Pakistan gave to its citizens “an opportunity to demonstrate to the world how can a nation, containing many elements, live in peace and amity and work for the betterment of all its citizens irrespective of caste and creed”. He added the wish “to live peacefully and maintain cordial and friendly relations with […] immediate neighbors and with the world at large”.

Sharing this ideal, in November 1947, France became one of the first countries to establish formal diplomatic relations with Pakistan, thus ushering a relationship based on mutual respect and common values. Ever since then, the ties between our two countries have expanded in all fields: political, cultural, economic and most importantly people-to-people.

As it enters its 69th year of existence, Pakistan has accomplished a lot, oftentimes in difficult circumstances. As a young State, it still faces immense challenges. But it can count on friendly countries such as France to help overcoming them and to contribute to the realization of a peaceful, democratic and prosperous Pakistan.