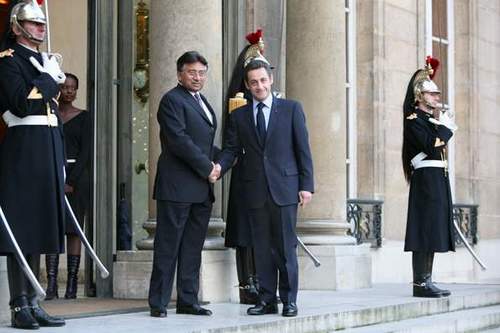 The President of the French Republic met with his Pakistani counterpart, Mr Pervez Musharraf at the Elysee Palace on Tuesday January 2.

It was an important meeting as Pakistan goes through difficult times after the heinous assassination of Benazir Bhutto on December 27.

The meeting took place after the phone call between the two Heads of State on December 30 and the visit to Pakistan of Mr Bernard Kouchner, Minister for Foreign and European Affairs, as soon as January 1st. France was the first country to send a high level official to Pakistan after the attack. The President of the French Republic has again expressed France’s solidarity with the Pakistani people in this ordeal.

The talks between the two Heads of State especially focused on the February 18 elections. The President of the French Republic stressed the best response to give to terrorism and the terrorists is the holding of elections in the best possible conditions of pluralism, transparency and security.

The President of the French Republic said once again that France will continue to provide Pakistan all its support in the fight against terrorism since France and the world’s interest lies in a stable, united and democratic Pakistan.

Finally, President Sarkozy has again highlighted the essential role of Pakistan in the improvement of the situation in Afghanistan./.