At the end of 2015, the 21st session of the Conference of the Parties (COP21) will be held in Le Bourget, near Paris. Delegates from all over the world will meet at this major event to reach a crucial agreement on climate change. At the helm of the 2015 Paris Climate Conference is Laurence Tubiana, who has been appointed France’s Special Representative and is a world-renowned climate specialist. 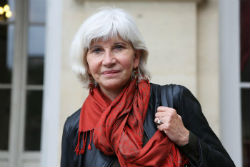 Laurence Tubiana’s office is surrounded by those of her colleagues seconded from various French government departments: the ministries of foreign affairs, the economy, and of course, ecology and sustainable development. A large number and wide range of people have been mobilized. France must not only ensure that the conference runs smoothly and welcome the numerous delegates, but also facilitate negotiations between the partner countries to finalize an ambitious and binding agreement to keep global warming below 2°C. Since the industrial revolution, human activities have caused the earth’s temperature to rise much more rapidly than nature’s capacity to adapt. The consequences are far-reaching: severe weather events are increasingly frequent, ecosystems and biodiversity are under threat and the number of people displaced by climate change continues to rise, not to mention the resulting economic and financial risks.

A woman with experience

Laurence Tubiana is perfectly aware of the stakes of this truly global problem. She also understands the reticence of countries that, without wanting to sacrifice the growth of their societies, are called upon to change their traditional ways of working to meet a critical global target. Ms Tubiana, a researcher with a PhD in economics, quickly became interested in the close ties between development and economic sciences. She is actively involved in associations, and her experience in the field along with her many interactions with civil society all over the world have led her to look at trade rules from a more global angle, taking into account their social and environmental impacts. She has also learned over the course of her career how to build networks and gain knowledge from the opinions of others. After founding a review entitled Le Courrier de la Planète, she became an environmental adviser to Prime Minister Lionel Jospin. During that period, she also created her own institute, the Institute for Sustainable Development and International Relations (IDDRI), while teaching at the Paris campus of France’s leading school of political science, Sciences Po Paris.

Being open to others and their perspectives, building networks and communicating are the key ideas that have marked the career of Laurence Tubiana. In her office soberly decorated in orange tones with luminous reproductions of works by the Austrian painter, Gustav Klimt, she admitted that she does not feel like she is accomplishing exceptional things for the environment on a daily basis and that she worries about increasing her carbon footprint when flying to her various assignments outside Paris. Although France has committed to setting an example in tackling climate change, Laurence Tubiana recognizes that, for the time being, “we are not the best in Europe, but the debate on the energy act presented to the French Parliament in autumn 2014 was a landmark. Protecting the environment and sustainable development are no longer issues dealt with by green parties alone; they concern all actors, regardless of their political orientation”. And they now concern all citizens.

Laurence Tubiana’s agenda is clearly positive: although fighting climate disruption is crucial in the medium and long term for the entire planet, the mechanisms introduced can be beneficial in the short term and even provide opportunities in times of economic crisis. For example, retrofitting buildings for improved energy efficiency improves energy savings. This first environmental gain generates others, of an economic nature: jobs that cannot be offshored are created to conduct this work. The energy transition can therefore be accompanied by increased competitiveness. It encourages innovation, fosters the creation of sustainable jobs and safeguards public health. All countries seek these multiple collateral benefits concerning growth, jobs and quality of life.

Laurence Tubiana is counting on these points of convergence to ensure that COP21 actually produces an agreement. She is optimistic. “Countries’ interests change as they grow better informed about the subject,” she explained. “Measuring pollution rates, for example, has helped to alert governments and societies and to initiate change. Information is an important and even paramount step when it comes to climate change. It is a fascinating topic because it provides a field for observation and mutual understanding that is establishing, globally and gradually, a shared international vision for the future, based on common values. It is a lesson in humility. We are thus learning to acknowledge everyone’s cultural and symbolic interests to answer a common question: what will life be like in the future?”

On the strength of her convictions and experience, Laurence Tubiana intends to facilitate the negotiations calmly and responsibly. Although there is clearly an urgent need to act for the planet and the well-being of all citizens, the green economy can also be a source of growth and, above all, a sustainable solution.

Pascale Bernard
N.B: The claims and opinions contained in this article, which aims to provide information on contemporary France, have no official value.