From 30 April to 12 May 2013, the Parc des Expositions de Paris will host the traditional Foire de Paris, an exceptional event that brings together exhibitions for the general public, including the famous Concours Lépine, the Oscars’ equivalent for inventors.

“This event first started 109 years ago along the lines of the Exposition Universelle of 1900 and is designed to familiarize the general public with the latest innovations, trends and curiosities”, according to Carine Preterre, director of the Foire de Paris, which is organized by the Comexposium company and held annually from the last week in April to the first week in May. 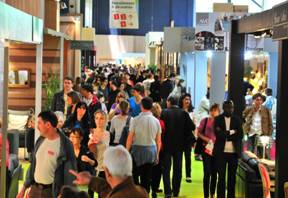 The Foire de Paris, which has been a success for over a century, brings together some 20 exhibitions catering for three different worlds: the home and the environment, leisure and well-being, and global cultures. “We are also developing family-geared activities and festivities”, said the Foire de Paris director, mentioning the 2013 edition’s exhibition Le monde de Chindogu (“The world of Chindogu”) where 200 original, bold Japanese creations will be presented. This year, visitors will also be able to see soap sculptures at the S.O.A.P Projects exhibition, attend a fashion show of haute couture dresses made of toilet paper for the exhibition Au fond à droite : porte ouverte sur les toilettes (“To the world of restrooms: last door on the right”), and sample apple wine and coconut water at the Carré des gourmets space.

Crowds of people always flock to the Foire de Paris, the leading trade fair and festive event in Europe. Last year, it welcomed 2 000 exhibitors and 620 000 visitors. “The Fair’s indirect economic spin-offs are estimated at 350 million euros”, said Carine Preterre. Commerce reigns supreme: in 2012, nine visitors out of ten spent an average of 680 euros. Exhibitors and activities are not the only attractions for visitors: since 1929, the Foire de Paris has welcomed the prestigious Concours Lépine where wildly imaginative inventors have been vying to create the objects and items of our future.

This amazing economic tool and innovation accelerator was founded in 1901 by the prefect of police Louis Lépine. According to Gérard Dorey, president of the Concours, “Our inventors have created useful things every day and we are behind industrialization in France”. To participate in the Concours, you are simply required to register ownership of intellectual property, demonstrate the innovation by means of a prototype, and rent an exhibition stand. Discoveries are selected based on their ingeniousness and economic viability. According to Dorey, “At the end of the Concours, all creations are awarded a prize, the biggest one being the President of the Republic’s prize. Then come those awarded by institutions and companies, gold, silver and bronze medals, and lastly the medals awarded by the Association des Inventeurs et Fabricants Français (Association of French Inventors and Manufacturers).” 600 inventors are expected in Paris for the 2013 edition, a third of them from abroad. 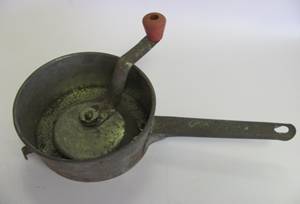 Jean Mantelet’s food mill won a prize in 1931 and led to the Moulinex brand. © Concours Lépine

In helping to build French know-how, the Concours Lépine has spotlighted objects that have changed our daily lives, like the ballpoint pen (1919), the steam iron (1921) and the Aspivenin venom extractor (1983). Famous brand names originated from this economic springboard, including Moulinex which won a prize for its food mill in 1931 and later became a household electrical appliances group and then a brand of the SEB company. Nowadays, the Concours gives rise to inventions in alternative energy, medical technology and biotechnology. For the curious among you, Gérard Dorey unveils some of the Lépine 2013 highlights: “This year, visitors will discover a self-washing cabin for cleaning supermarket trolleys, a transportable TV antenna that picks up all existing signals, and LED night reading glasses.”