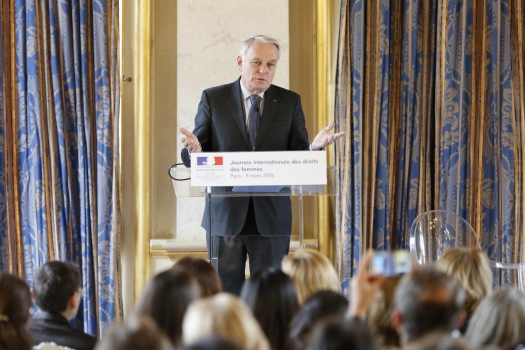 On the occasion of International Women’s Day, the Ministry of Foreign Affairs and International Development reaffirms its commitment to defending women’s rights.

Minister Jean-Marc Ayrault will give a speech today on parity in diplomacy at an event for Ministry personnel.

France champion’s women’s rights and autonomy and opposes all forms of violence against women. Among other things, it offers its support to female Syrian refugees, to all those involved in fighting gender violence in West African schools, and to those who assist victims of sexual violence in Democratic Republic of Congo. It also seeks to promote the role of women in the fight against climate disruption.

For more information on the Ministry’s efforts and to watch the video made for this occasion, visit http://www.diplomatie.gouv.fr/fr/le....

10 things that have changed for French women since 2012

1. A relentless struggle against violence

The 2012 Act against Sexual Harassment was the first law of the current five-year term. The Act of August 2014 on Gender Equality made it possible in particular to put into place the “téléphone grand danger” mobile alert service (400 telephones are currently active) and the eviction of the violent spouse from the couple’s home.

2. Equality in the workplace continues to progress

3. Cracks in the glass ceiling

The strict parity respected within the Government represents historic progress, and one of the world’s highest ratios (WEF report).

The validation of pension quarters for part-time employees is now a reality for employees working a minimum of 150 hours per quarter. Periods of maternity leave are also now better taken into account.

Parental leave has been reformed in order to reduce the average length of maternity leave and to encourage fathers’ involvement. A leave of absence for working partners of pregnant women has also been adopted.

Family support allowance for single mothers is being gradually revised so as to increase by 25% excluding inflation by 2018 (from €90 to €120). Protection against unpaid maintenance allowances was implemented on 1 April 2016.

Effective access to abortion has been facilitated with 100% of the costs covered, free and confidential access to contraception for minors aged 15 to 18, free morning-after pill at universities, and a strengthened local abortion service across the French regions.

In the media, the High Council for the Audio-visual Sector (CSA) requests a list of indicators every year from channels on the representation of women and men on their programmes. In schools, training on equality between girls and boys has been implemented for teachers and officials in the national education sector.

A Women’s Entrepreneurship Plan has been put in place to facilitate access to credit and support for female entrepreneurs. The aim is to increase the proportion of women among entrepreneurs to 40% by 2017.