Conferment of the French medal of Officer of Arts and Letters to the renowned Pakistani writer, Intizar Hussain

H.E. Mr. Philippe Thiebaud, Ambassador of France to Pakistan, conferred the medal of Officer of Arts and Letters to Mr. Intizar Hussain, a prominent Urdu-speaking Pakistani writer, on 20 September 2014 in Lahore.

A friend of France and its culture, an essential reference in literature of South Asia, Intizar Hussain has been praised for the richness and variety of his work, being critic, journalist, biographer, chronicler, poet, novelist and historian of the present time.

Experienced translator of famous French writers Sartre, Camus and Gide, he continues to be a fervent advocate of dialogue between modern literature in Pakistan and that of contemporary France and a promoter of the dialogue between cultures. 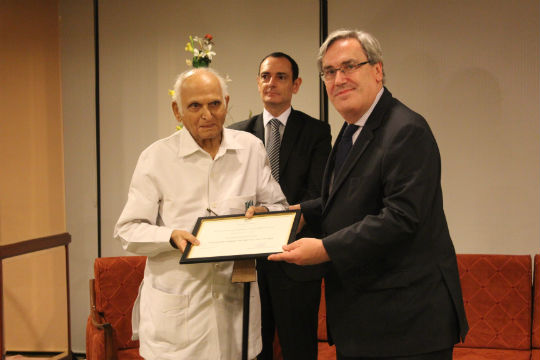