Although not unaffected by the crisis, the market for French porcelain remains and is constantly renewing itself, just like its specifically French expertise…

Until the 18th century, mastery of the arts of fire allowed France to produce glass and faïence pottery. However, the country lacked kaolin, a material needed for the production of porcelain which gives it its white colour, translucence and hardness.

Manufacture de Sèvres pottery workshop, which had been created a few years earlier under the influence of Madame de Pompadour, the favourite of King Louis XV. From then on, the Manufacture de Sèvres experienced phenomenal success and the porcelain industry developed in France.

The 19th century was the golden age of French porcelain, which was in demand all across Europe. This period saw the advent of major producers who continue today to perpetuate ancestral know-how.

In 2010, the Manufacture de Sèvres became the Cité de la céramique, in partnership with the Musée national de la porcelaine. Although this economic period is tense, the Cité, which is now the only remaining porcelain production tool in Europe which remains in public ownership, reported a turnover in 2012 of €2.2 million, an increase of 18% on previous years. This performance can be explained largely by sales abroad, which represent 11% of its activity. Its production is exported to countries including Japan, the United States and Russia, where reproductions of 18th 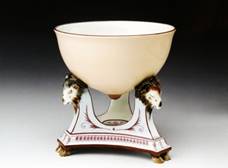 and 19th century models are very popular, such as the service of Marie-Antoinette, with the famous “breast cup” or the Duplessis service with its bird motif. The success of the Cité de la céramique is also the result of a process of creativity and artistic renewal, with pieces which are less and less utilitarian, as porcelain objects often were traditionally, and increasing numbers of works of art, including the vase of Pierre Soulage, which was produced in a limited and numbered edition, and the Métro vase by the Japanese Naoto Fukasawa, which has seen real enthusiasm since its creation in 2010.

The Pillivuyt workshops employ more than 200 people and reported turnover of €15 million in 2012. The company is present in more than 50 foreign countries, representing half of turnover. Pillivuyt is very popular in the United States and created a Minneapolis subsidiary in 2003.

Since its opening in 1919, three generations of the Raynaud family have run the company that bears their name. From the outset, the owners

were interested in exporting, firstly to Russian customers who particularly liked the Tzarine moka cups, which were hand-painted and reproduced perfectly the ceilings of the palaces of Saint Petersburg. In the 1950s, Raynaud turned towards the United States, adapting his pieces to the American market without hesitation: plates grew from 25cm to 27cm, and the handles of the cups were adapted to American habits, in the “mug” form held with several fingers. For the last three years, Raynaud has also been present in China, and produces numerous made-to-measure pieces for international customers.

Haviland was established in 1842 and is also a key name in French porcelain. As with the other major names, the pieces are produced entirely by hand on French soil. With turnover of close to €9 billion in 2012, Haviland is present worldwide through a network of 500 distributors from the Middle East to the United States as well as North Africa, Asia and Russia. Haviland doesn’t hesitate to adapt its collections to demand. In France, a Comédie française collection has been created, paying homage to the great French theatre established in 1680. In Middle Eastern countries, products with more incrustations and precious materials are offered.

Bernardaud, another great French porcelain maker, celebrates 150 years of production this year. Internationally renowned artists including Jeff Koons, Sophie Calle, David Lynch, Prune Nourry and JR have designed collections of plates for the occasion. The result is surprising, original and thoroughly contemporary. Porcelain has a bright future ahead!