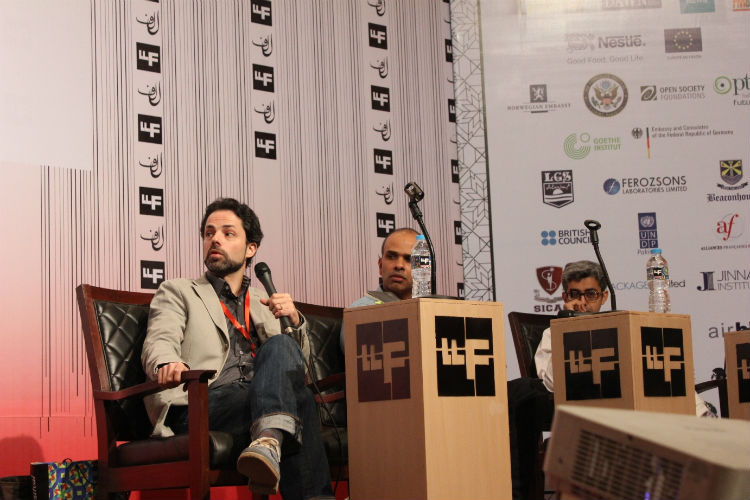 Like every year, the month of February has been synonymous with literary and exchange encounters in Lahore. This year the French presence was asserted thanks to the participation of Mr. Laurent Gayer, In-charge of research at CNRS/CERI-Sciences Po, Specialist of the subcontinent and particularly of urban dynamics and violent mobilizations in India and Pakistan.

His latest book, Karachi. Ordered Disorder and the Struggle for the City, published by Hurst (London), HarperCollins (Delhi) and Oxford University Press (New York and Karachi) has attracted many comments and enthusiastic speeches.

As the result of a long investigation on armed conflicts and the "ordered disorders" specific to the unique metropolis of Pakistan, this book defends the idea that a form of order has emerged in Karachi during recent decades, despite - and sometimes under - its chronic violence. Characterized by the logic of domination, the rituals of political interaction and relatively stable forms of arbitration, despite their consubstantial violence, this "ordered disorder" has made the violence manageable by the people of Karachi - which does not exclude a feeling of throbbing insecurity, resulting from continuous transformations of these conflicts throughout their updating.

Karachi has been thus a subject of study in Lahore and the city of light "Roshni Ka Shehr" in Urdu language, and which never sleeps, has once again mobilized passions.

This event contributes to the debates of ideas initiated by the Department for Cooperation and Cultural Action of the French Embassy in Islamabad and the French Alliances in Pakistan during the year 2015. It echoes the "Open Doors" program. (http://www.ambafrance-pk.org/Open-D...)