The celebrations to mark the 400th anniversary of the birth of André Le Nôtre, King Louis XIV’s principal gardener, show just how influential a figure he was. Today, French formal gardens are major tourist attractions the world over and continue to inspire.

Born in 1613, André Le Nôtre was King Louis XIV’s gardener from 1645 until his death in 1700. A landscape architect and master of design and composition, he created the gardens at the Château de Versailles, as well as those at the French 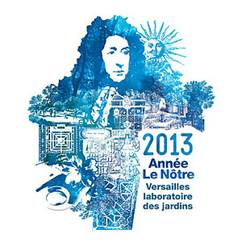 châteaus of Vaux-le-Vicomte, Chantilly, Saint-Germain-en-Laye, Sceaux, Compiègne, Saint-Cloud and Malmaison. He also worked on numerous public spaces, especially in Paris, where he designed the Luxembourg and Tuileries Gardens.

These sites are major visitor attractions, with formal gardens a particular favourite in a country with over one million hectares of gardens. Le Nôtre’s gardens have transcended borders, becoming a benchmark from which all of Europe has drawn inspiration. Striking examples include the parks at the Royal Palaces in Caserta, Italy and La Granja, Spain and the châteaux of Schönbrunn in Austria and Belœil in Belgium. The Summer Garden in Saint Petersburg, Russia, is also a remarkable achievement. And Le Nôtre’s influence can still be felt today.

Le Nôtre’s technical feats brought together engineers and artists, as well as all professions relating to the layout of green spaces. This interdisciplinary cooperation continues today in the training of landscape architects. The modernity of Le Nôtre’s work can mainly be seen in the manner in which it blends into the surrounding landscape, such as the horizon, forests, paths and cities. Each location’s natural features are also analyzed and utilized to perfection, including the relief, views, orientation, water, etc. The way in which he created links and continuities, made transitions and connected territories remains a source of inspiration to this day. Riem Park in Munich, for example, offers true scenography between mountains, lakes and hills. In Normandy, garden designer Jacques Garcia used all these concepts to recreate the gardens at the Château du Champ de Bataille.

Visitors do not always notice the avant-garde design, but the sense of harmony which emanates from French formal gardens is felt by all. They are struck by the uniform, often linear aesthetics, where the water surfaces, built into the planted areas and the symmetrical parterres, play a major role. French formal gardens also introduced innovations such as hydraulic engineering, orange groves and pavilions. Le Nôtre made use of the latest developments at the time in the areas of optics, hydraulics and topography, such as using measuring instruments which provided him with complex geometric compositions. The raised terrace, the trimmed elevated plants and the size of the walls which correct the perspectives place the observer in a specific location, creating illusions and optical effects. The groves, with their deep recesses, hold many surprises, including secluded hideaways and new perspectives to be discovered. Thus, beneath the classicism and apparent austerity lies genuine scenography and an unquestionable taste for entertainment, which can be seen in all its glory in the Grandes Eaux in Versailles, an enchanting water show with all the fountains running in full play set against a musical backdrop, which can be enjoyed while strolling in the gardens of the Château. 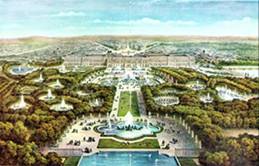 From the outset of his career, Le Nôtre wanted to master nature in order to make it the symbol of the monarch’s omnipotence. This anniversary provides an opportunity to revive the 17th century (known as the Grand Siècle [Great Century]), especially in Versailles, and many events have been planned. In the gardens of the Château, the Latona Basin and parterre, undoubtedly Le Nôtre’s most famous work, has been restored. For the first time, millions of visitors will be able to see the different stages of this restoration project via a panoramic viewpoint. The Water Theatre Grove has been reinterpreted and the Gilded Children Basin has recovered its golden lustre. Casts of Pierre Puget’s monumental sculptures, Perseus and Andromeda and Milo of Croton, will return to the gardens. A Gardens of Versailles mobile app will be available to visitors, offering personalized tours. The highlight of the festivities will be in June and July, with fireworks, water shows, ballets, theatre and more. And for true aficionados, the conference series organized by the Versailles National School of Landscape Architecture on Le Nôtre’s influence on contemporary landscape architects is not to be missed.