French expertise in the field of seawater desalination [fr]

Accentuated by the perceptible consequences of climate change, shortage of drinking water is a major issue for humanity. To overcome this crucial challenge, one solution consists of desalinating seawater, which represents 97 % of the water on the planet. And this is a field in which France has genuine expertise.

Since the 1960s, French institutions have been investigating the desalination of seawater, initially with the aim of coupling desalination with other modes of productions of energy. More recently, industrialists such as Suez Environnement or Veolia have successfully developed technologies for desalinating seawater. They now export their knowhow across the world.

At the end of 2012, France contributed to the setting of a new record. The biggest seawater desalination plant in the world has been built in the state of Victoria in Australia. The project is 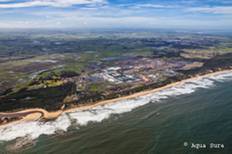 estimated to have cost 2.4 billion euros, and represents a considerable source of supply of drinking water. The site is able to produce up to 450,000 m3/day, equivalent to the consumption of a city such as Lyon. In addition to building this desalination plant, Suez Environnement, via its subsidiary Degremont, is responsible for operation and maintenance of the site. “This plant is a terrific showcase for our expertise, which will help us win many more projects,” says an enthusiastic senior official of the company.

Australia was in particular need of this drinking water, having suffered a period of drought for nearly 12 years. The French group Suez Environnement had taken due note of the significance of the Australian market, which has in a few years become the third largest market for the French giant in water treatment and waste management, behind France and Spain. In 2012, the industrial group earned 7% of its total revenue in Australia.

Suez Environnement has also landed contracts in other countries, notably in Saudi Arabia where its subsidiary Degremont is supplying and installing drinking water production units as part of a contract for 40 million euros. Production has already begun on one of the modules, enabling drinking water to be brought to 3000 households previously supplied by tankers.

Even in Europe, where the supply of drinking water is not yet suffering significant problems, desalination is developing. The Degremont company was the pioneer in the process of desalination by reverse osmosis (first installation in 1969 on Ile de Houat, France). Since 2009, this subsidiary of Suez has built the largest desalination plant in Europe in the Barcelona region (Spain), with a drinking water production capacity of 200,000 m3/day. In total, the firm has built over 255

The Société Internationale de Dessalement occupies a prominent position on the market for thermal desalination by evaporation. It is a subsidiary of Veolia Water Solutions & Technologies, which itself depends on the French group Veolia Environnement. Originally known for its thermal desalination technology, the company now uses reverse osmosis too, as well as hybrid solutions combining both techniques.

To build the Fujairah plant in the United Arab Emirates, the Veolia subsidiary chose the reverse osmosis technology, as at Campo de Dalías in southern Spain. But the industrial group chose a hybrid solution for the construction of the biggest hybrid plant in the world in the Ashkelon region south of Tel Aviv.

The Veolia Environnement group is currently world leader in utility companies in four main areas: waste, energy and transport as well as water and its treatment. It employs 313,000 people in over 74 countries across the world.

Water desalination on a large scale

According to the International Desalination Association, nearly 17,000 plants are currently in operation in 120 countries. The main countries that have resorted to this source of drinking water are the countries of the Arabian peninsula (notably Saudi Arabia and the United Arab Emirates), Spain, the United States and China. At the beginning of 2012 the Chinese government indeed announced a large-scale plan to develop a desalination capacity of nearly 2.5 million m3/day between now and 2015.

French industrialists are also meeting the need for seawater desalination in Algeria. In fact, the Algerian authorities have decided to increase the number of plants significantly between now and 2019. All these projects are encouraging other French energy industrialists to venture into the field. This is the case of Total Energie Venture, which took a minority shareholding in the Californian company NanoH20 in 2012. More globally the world market for desalination, estimated at 7.8 billion dollars in 2010, should reach 18.3 billion dollars by 2016.