You have probably never heard of Aérazur, Babolat, Béal, Cardial, Cousin Biotech, Floréane, Kermel or Texinov, yet all these companies are world leaders in technical textiles, which are increasingly used in the objects we use every day.

France alone accounts for 24% of Europe’s production of these textiles, which have specific properties that make them suited to very specific applications. Such products may be woven, knitted or nonwoven and are used in very many sectors including agriculture, healthcare, transport, individual protection, construction (Saint-Gobain Vetrotex is the world leader in fibreglass used to reinforce concrete), civil engineering, sport, industry, electronics and food production. They have many different properties, being highly resistant, fireproof, antimicrobial, anti-UV or antistatic.

France is home to more than 370 companies specialized in technical textiles. Their gross turnover totalled €5.88 billion in 2012 and companies specialized in nonwoven items export more than 67% of their production. After contention products, such as stockings and tights for people with poor circulation, and geotextiles to strengthen roads in areas where there is a risk of subsidence, manufacturers have developed ever more innovative textiles over the years. Fire brigade clothing can thus now indicate the surrounding temperature and determine the toxicity of the smoke released by the fire. The company Kermel, from Eastern France, produces meta-aramide fibres, which are particularly popular for the design of articles aimed notably at professions exposed to sources of violent heat.

Farmers can now acquire shading screens and films that can be used to control the ripening of crops. Texinov, an SME, has notably developed a textile that reflects the sun’s rays, in partnership with the National Institute for Agronomic Research (INRA). It increases the performance of vines and improves grape quality.

Industry is also making increasing use of textiles because of their lightness and specific properties, in particular their resistance which is often far higher than that of metals such as steel. Did you know that 11% of the average mass of a car is now made up of fibres? In France, NCV and Aérazur (a subsidiary of the French company Zodiac Aerospace) are specialized in producing airbag fabrics. The brakes used by Airbus and Boeing, like those employed in Formula One racing cars, are made up of disks and carbon pads, most of them manufactured by Messier-Bugatti or Valeo.

French-made technical textiles are also widely used in the sport and leisure sectors. They are used for example to produce NCV 3D sails and for ropes by Cousin Trestec and Béal, which are particularly popular amongst amateur and professional mountain-climbers. Many tennis champions also take advantage of the latest technological advances by using cords developed by the company Babolat.

Connected textiles also show considerable industrial promise and CityZen Sciences is already a player. This young, dynamic company attracted a lot of attention at the last CES (Consumer Electronics Show) in Las Vegas and produces "smart fabrics". Its "D-shirt" is capable of providing physiological data on an athlete and should beavailable by the end of the year. 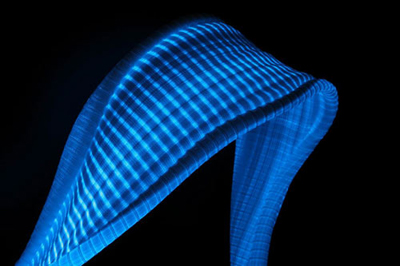 China and the United States are the first two markets planned for the company’s development internationally.

It is in the healthcare sector that we are seeing a real revolution. The company Cardial has thus established a global reputation thanks to its artificial arteries woven from polyethylene terephathalate yarn. Floréane, a leader on its market, has for its part developed renowned expertise in the area of parietal and visceral surgery. In Northern France, Cousin Biotech manufactures surgical implants in small quantities, designed for back problems, the implantation of vascular prostheses and reinforcement of ligaments. The Gemtex laboratory is also of note, currently working on a luminous fabric that could be used to help treat certain cancers using photodynamic therapy.

France’s strengths in this sector largely draw on the quality of the high-level training provided by its higher education establishments. This is the case notably of ENSAIT, the National School of Textile Industries and Arts, which alone issues 60% of France’s engineering diplomas in the textiles field. Students can also study the trades in this sector at the HEI engineering school in Lille, ENSISA (South Alsace Engineering School) in Mulhouse, and at Lyon’s textile and chemistry institute. The ENSCI (National Industrial Design School) also offers high quality training with three aspects: industrial creation, textile design and continuous training.

The technical textiles industry and its many areas of application have considerable development prospects. French companies are set to remain at the leading edge of this emerging sector for some time to come.