France awards Mrs. Tehmina Durrani with the Order of Arts and Letters

H.E. Mr. Philippe Thiébaud, Ambassador of France to Pakistan, conferred the prestigious French Award of the “Order of Arts and Letters” (Ordre des Arts et des Lettres) on Mrs. Tehmina Durrani on 24th July at the French Residence in Islamabad.

This award was established by President Charles de Gaulle. Its purpose is the recognition of significant meritorious contributions to the arts, literature, or the propagation of these fields. The recipients of this award are French nationals as well as prestigious foreign writers, artists, musicians…

Mrs. Tehmina Durrani’s first book “My Feudal Lord” has been translated into 39 languages and received many awards and recognition in the country and abroad. Her second book “A Mirror to the Blind”, a biography of Abdul Sattar Edhi, narrates Pakistan’s renowned and highly decorated social worker. Her third book “Blasphemy” was another success. This book also made it into Pakistan’s bestseller. She has been engaged in highlighting gender-based violence in Pakistan’s rural and urban society. The 2012 book launch of “Happy Things in Sorrow Times” is a novel with 35 water color illustrations done in Kandahar at Afghan refugee camp. 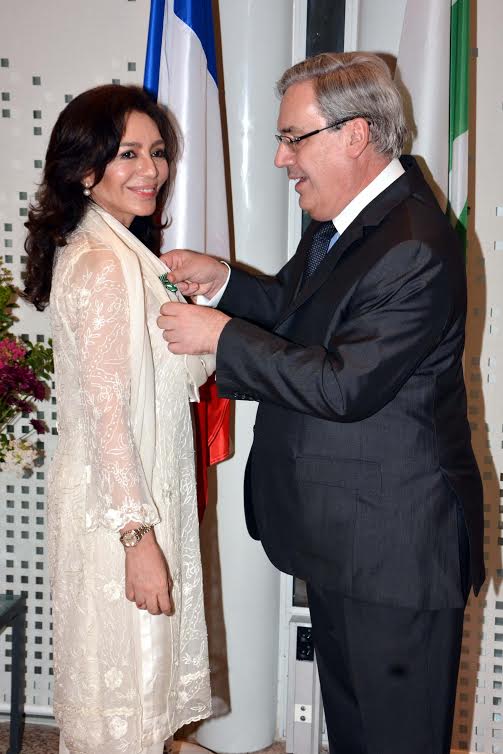 Before conferring the Award, Ambassador Philippe Thiébaud highlighted the literary and social work done by Mrs. Durrani, a famous writer, an activist and an artist and said that this award was a recognition of her achievements. The Ambassador quoted the famous French writer, André Malraux: “Culture is the soul of democracy and freedom”.

Mrs. Durrani thanked the French Government for bestowing this award upon her. She also thanked Ambassador Thiébaud for hosting the award-conferring ceremony. Mrs. Durrani highlighted her passion for social work particularly relating to women empowerment. At the end she signed her book “Happy Things in Sorrow Times” for her friends and well-wishers present on this occasion.

The reception was attended by diplomats, representatives of media and particularly by many friends of Mrs. Tehmina Durrani.