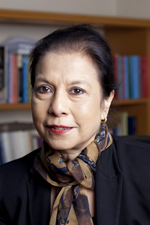 Farzana Shaikh is a political historian and Associate Fellow at the Royal Institute of International Affairs in London, where she directs the program on Pakistan.

A Pakistani by birth, she is officially resident in the UK and France. She has a Ph.D. in Political Science from Columbia University in New York and is a former Research Fellow of Clare Hall Cambridge. She has held university lectureships in the UK, the US and Europe, and was most recently named a Fellow at the Institut d’Études Avancées in Paris. She is also a respected foreign policy expert on Pakistan and regularly advises government departments of European Union member states, including France.

Farzana Shaikh is the author of several books and has published extensively on Pakistan and South Asian Islam. Her latest book, Making Sense of Pakistan , was selected by The Guardian in 2010 as one of four ‘Essential Books’ for Prime Minister Cameron’s government and in 2014 by Outlook magazine in its ‘Canon of 100 Essential Books’.

Recasting the politics of Sufism in Pakistan by Farzana Shaikh

Her talk will analyse relations between the state and Islam in Pakistan after 9/11 through the prism of the country’s historically troubled engagement with popular Sufism.

She will explore attempts to empower Sufi Islam and assess the implications of appropriating the language of Sufism in the service of the state. The role of international policy think-tanks in promoting Sufism as a variant of ‘moderate’ Islam in Pakistan will also be considered.