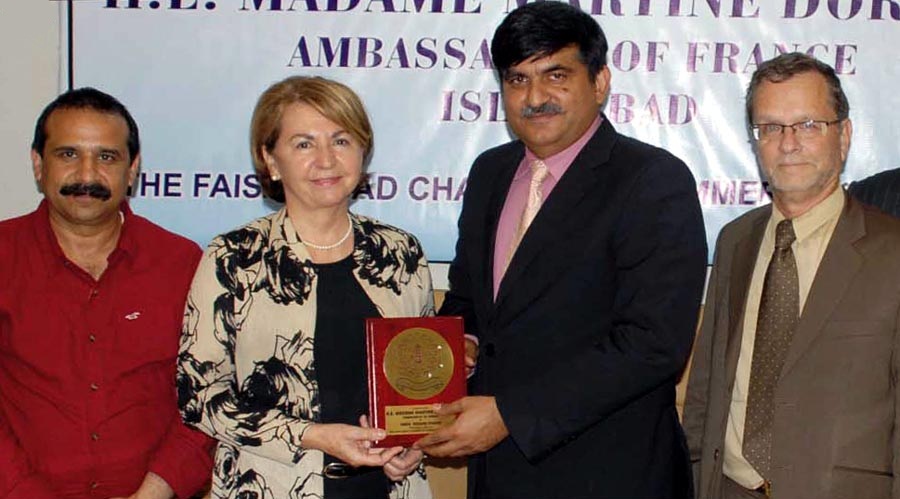 H.E. Mrs. Martine Dorance, Ambassador of France to Pakistan, was received at the Chamber of Commerce and Industry of Faisalabad on 18th May 2015.

She met with the President of the FCCI, Mr. Rizwan Ashraf, and attended a meeting in which the members of the consular institution were invited. On this occasion, the Ambassador spoke about the excellent ties between France and Pakistan and the desire of France to strengthen her economic relations with Pakistan and with the city of Faisalabad in particular. The granting of the EU GSP + status to Pakistan, an opportunity for Faisalabad companies, had to be availed particularly in the textile and agro-industrial sectors in order to increase their exports to Europe. The Ambassador highlighted the importance of the compliance by Pakistan of its obligations regarding the implementation of 27 international conventions related to the GSP +.

The Ambassador visited Faisalabad Water Treatment Plant on 19th May, financed through a loan from the French Treasury for an amount of € 33 million. Launched by Vinci, this station (under construction, its start is scheduled by end of 2015) is expected to meet the drinking water needs of one third of the population of Faisalabad. 80% of available water will be used for domestic purposes and 20% will be intended for industrial use.