Cutting-edge technology in the world of disabled sport [fr]

The unprecedented interest in the London Paralympics has drawn attention to the futuristic equipment that enabled the athletes to achieve such amazing performances. High-precision tools have been designed jointly by athletes, researchers and experienced technicians.

With full stands and high television ratings, the London 2012 Paralympic Games picked up the baton from the Olympic Games in remarkable fashion. The performances of the champions, which had never been so strong or spectacular, were covered widely in the media. In Pakistan in particular all eyes were on Haider Ali who had won a silver medal in long jump in Beijing 2008 and who broke the Asian long jump record in China in 2010. 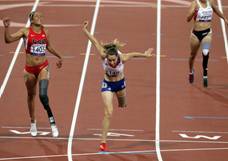 Part of the reason for the attraction of the spectacle was the significant development in the equipment used. High technology and cutting-edge materials, in particular, have enabled prosthetic limbs to become incredibly flexible and strong. Running blades for amputees made the headlines in the media. Nicknamed “Blade Runner”, South Africa’s Oscar Pistorius, an international symbol of disabled athletes, beat the 400 m world record. He was beaten in the 200 m by Brazilian Alan Oliveira, also fitted with revolutionary prostheses. One event had far-reaching repercussions: Oscar Pistorius also participated in the 400 metres at the Olympic Games, a first in Olympic history.

Where do the technological advances that are transforming these athletes into futuristic-looking superheroes come from? Finnish firm Össur and German company Otto Bock are the main suppliers of athletes’ running blades. Having said that, the key element in a prosthesis is the quality of the fit, the element that allows it to adapt perfectly to the part of the body concerned. In this field, athletes in France have excellent makers of orthopaedic devices,

who work in partnership with the top specialist research laboratories. Patrick Ducros, a prosthetics designer from Montpellier, for example, designed the prosthesis of Orianne Lopez, a finalist in the 100 metres in the last Games, in collaboration with the company Re-Flexion Composites and the university of technology, the Ecole des Mines d’Alès.

Sponsored by Electricité de France, the world’s number one electricity producer, Marie-Amélie Le Fur has become an athletics icon. She is equipped by the Proteor company, as are table tennis player Stéphane Molliens, surfer Eric Dargent and mountain-biking champion Stéphane Büchler. Proteor has a worldwide reputation and runs agencies in China, Morocco and Canada. 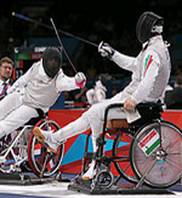 Other equipment enjoyed justified recognition at the Paralympic Games. The Handifix system for fencers in wheelchairs is undoubtedly as sophisticated as it gets and has really changed the practice of the sport. It is the result of a close collaboration between athletes, engineers and manufacturers. Made from carbon fibre and aluminium, it is certainly both more rigid and lighter than the attachment systems used in the past, improving both safety and speed. It has been adopted by a great many teams worldwide.

Other materials are not, or not as yet, in the Paralympic Games but are now proving essential in the practice of high-level sport. If the swimmer Philippe Croizon is a star, it is also thanks to his prosthetic limbs with fins. A quadruple amputee, he has just linked the five continents symbolically by swimming across four straits! The design and development of his asymmetric flippers benefited from a broad-based partnership between many players in the sports and academic worlds.

In sailing, the French yacht Néo 495 from the Coques en Stock shipyard has already been adopted by several European crews and has entered the fray for the next Games. The technical features of the Néo 495 make it excellent for beginners, novice sailors and sailing competitions for disabled and able-bodied sailors.

According to the French National Institute of Statistics and Economic Studies (INSEE), disabled sport in France, all disciplines and categories combined, numbered over 25,000 participants in 2011. If we add the practice of adaptive sport, the numbers rise to nearly 70,000. The economic and financial challenges of equipping these athletes are considerable. In fact, a personalised wheelchair, such as a sit-ski, costs between 1,800 and 3,000 euros and the cost of a prosthesis specially adapted to an athlete is between 3,800 and 4,600 euros.

The remarkable performances of these athletes are of course related to the emergence of this futuristic equipment, but the human dimension is still the decisive factor. It is the courage and determination of these men and women that enables them to surpass themselves and achieve such feats. In the world of disabled sport, the achievements of athletes, as Philippe Croizon says, “show that nothing is impossible and that the Paralympic champions deserve recognition as the gods of the stadium of the Olympic Games”.