How the main Himalayan thrusts behave within the western syntaxis of the range is poorly understood. This is partly because large earthquakes in Kashmir and northern Pakistan are relatively rare. Consequently, few surface ruptures have been mapped, the exact locations of active faults are ambiguous, and few paleo-seismological studies have been undertaken. As in other parts of the Himalayas, it is important to identify such faults and start elucidating their seismic behaviour before the next large earthquakes strike. 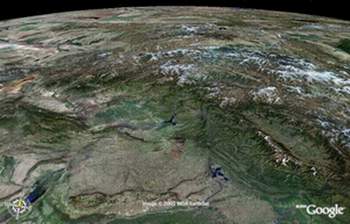 Geomorphology is an important tool for this task. The thrust fault that slipped during the October 8th 2005 Muzaffarabad earthquake stands out clearly in the geomorphic landscape of the middle-Jhelum valley. As mapped by one of us (PT) south of Muzaffarabad prior to the earthquake, this thrust (which we refer to as the Jhelum Thrust) lies on the east bank of the river, where it is marked by a clear slope-break at the base of prominent triangular facets. Upstream, SW of Garhi Dopatta, it cuts the river, keeping a SSE-strike southwards across the mountains. West-directed thrusting has made the Jhelum valley strongly asymmetric. The river incises directly into the Murree sandstones on the west side of the valley, while it has abandoned large inset terraces along the east side. Near Thotha, such fluvial terraces, which contain far-traveled boulders, stand more than 200 meters above the riverbed. Tributary catchments east of the river, where mountain heights reach 3200 m, are well developed, while they are almost insignificant along the west bank, where there is less relief (≤ 1400 m). Just north of Muzaffarabad, the thrust steps leftwards across the Neelum, continuing into the Kunhar valley along high faceted spurs. It may extend farther west, north of Mansehra.

The Jhelum Thrust is a somewhat less prominent geological than geomorphic feature. Except near Muzaffarabad where it emplaces Precambrian basement over Murree sandstones, it cuts mostly across rocks of comparable age. In section, it dips eastwards under a large hanging-wall anticlinorium, whose core exhumes schistosed Murree red-beds and locally their substratum. Clearly, the Jhelum Thrust corresponds neither to the Main Frontal (MFT), Main Boundary 7 (MBT), Main Central (MCT) thrusts, nor to other “Dun” thrusts mapped farther east. But it appears to coincide at depth with a segment of the well-known “Indus Kohistan Seismic Zone (IKSZ), which ought to be considered a lateral equivalent of the principal ramp of the Main Himalayan Thrust (MHT) in Nepal. Here however, unlike in Nepal, this ramp appears to reach the surface instead of remaining blind.

Facing the Jhelum thrust, another clearly active fault, the Jhelum fault, follows the Jhelum river southwards from Muzaffarabad towards Murree. This NS-trending fault, whose geomorphic signature is sharper than that of the Jhelum thrust, marks the base of the steep, up to ≈ 2 km-high range-front that has forced the 160°-southward hairpin turn of the river just south of Muzaffarabad. In addition, its ≥ 50 km-long trace cuts and offsets left-laterally nine west-bank tributaries of the river. Unlike the Jhelum thrust, the Jhelum fault, which dips steeply westwards, is a major geological contact along which the Proterozoic Hazara slates have been thrust over the Murree red-beds. Locally, it thus coincides with the well-mapped MBT (Murree Thrust), with which it has been assimilated. The present-day kinematics suggests that it still acts as a lateral ramp of the Murree-Abottabad imbricated thrust wedge.

We interpret the left-step of the Jhelum Thrust north of Muzaffarabad to result from current motion on the Jhelum Fault, a rare example of interaction between two intersecting active faults. At the same time, it seems now clear that motion on the Jhelum thrust is responsible for offsetting and folding the MBT, thus accounting for its 180° bend northwest of Pir Panjal. We discuss the origin and role of the active Jhelum Thrust and Jhelum Fault in a region located well north of the MFT. We interpret them to accommodate roughly EW-oriented, present-day shortening related to “zipper tectonics” within the tightest part of the Hazara syntaxis. This mechanism and the cusp-shape of the syntaxial bend probably result from slip partitioning at a much greater scale. Within this framework, we also examine how the 8 October 2005, Muzaffarabad earthquake on the Jhelum Thrust-ramp changed regional stresses and whether or not it brought other regional active faults - chiefly the Jhelum Fault, Murree Thrust, Kotli-Riasi Thrust, and IKSZ ramp north of Balakot - closer to rupture.