Agence Française de Développement, the French finance institution for development, will be loaning US $16 million to the Aga Khan Hospital and Medical College Foundation to support its expansion of infrastructure facilities on the Stadium Road Campus in Karachi.

This investment will refinance and fund infrastructure projects. Infrastructure financing include the induction of a third 1.75MW gas generator to reduce dependency on erratic city power and a 16MW grid station – to be completed this year – that will become the primary source of electricity for the University and its teaching hospital. There are also plans to recover waste heat from the gas generators and to increase the efficiency of the existing plant from 37 per cent to more than 75 per cent.

As part of its continued efforts to ensure the safe disposal of infectious waste, the University Hospital has installed a sophisticated incinerator that minimizes exposure to waste while meeting European Union clean air emission standards; by-product heat from the incinerator is used to generate almost 50 per cent of the hot water requirements for the campus. To meet the needs of the ambitious plans to expand health care services, a second incinerator is planned for 2015.

Proceeds from the refinancing will be used to fund a new ambulatory care building, neonatal, medical and paediatric intensive care units, a centre for innovation in medical education, a centre for early childhood development, a new private wing, and a new office building. 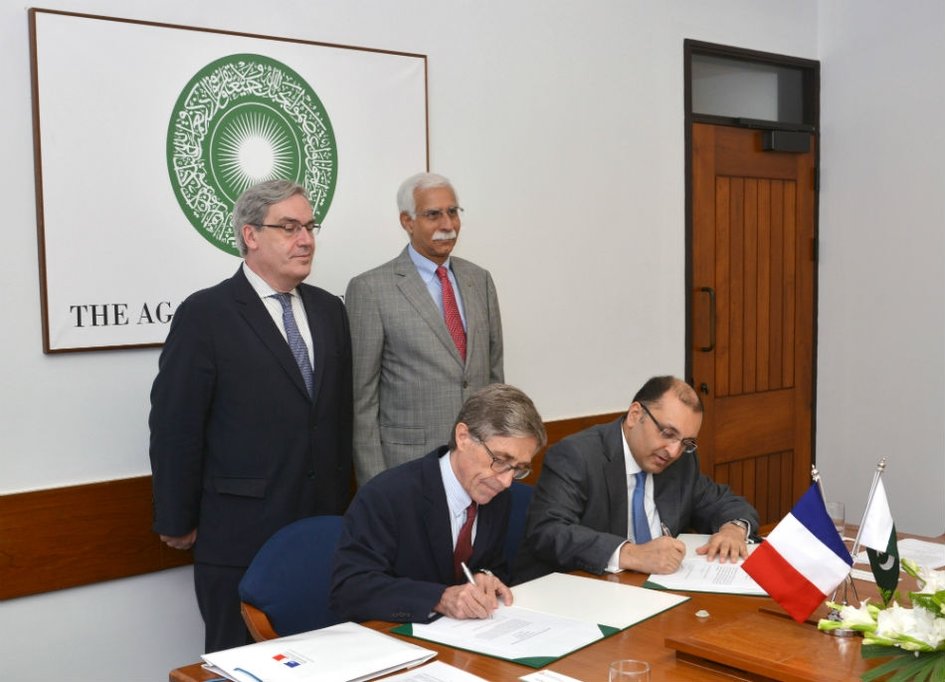 This loan is part of AKU’s US $150 million investment in expanding academic programmes and improving access to quality health care in Pakistan, a visible statement of commitment to the country.

AFD Group finances development projects in more than 90 countries on four continents. The Group boasts a network of 70 in-country field offices and bureaus, including nine offices in France’s overseas provinces and one in Brussels. Among the Group’s 1,742 employees, 711 work in the field offices.

AFD is aware of the severe energy crisis in Pakistan and has emerged as a major contributor to this sector with a mandate to increase the supply (through renewable energies) and reduce the demand (through energy efficiency). AFD has been supporting the rehabilitation or construction of hydropower stations such as Jabban, and Munda; capacity building through a center of excellence for hydropower, the Mangla training institute; and running an energy efficiency programme.

Chartered in 1983, the Aga Khan University is a private, autonomous university that promotes human welfare through research, teaching and community service initiatives. Based on the principles of quality, access, impact and relevance, the university has campuses and programmes in Pakistan, Kenya, Tanzania, Uganda, the United Kingdom, and Afghanistan. Its facilities include teaching hospitals, Faculties of Health Sciences consisting of Schools of Nursing and Midwifery, and Medical Colleges, Institutes for Educational Development, an Examination Board and an Institute for the Study of Muslim Civilisations. A Graduate School of Media and Communications, an East African Institute and an Institute for Human Development are under development; and liberal arts-based Faculties of Arts and Sciences and several Graduate Professional Schools will be set up in Pakistan and East Africa. Through its needs-blind admissions policy, the University imbues the most promising leaders and thinkers of tomorrow with an ethic of service and the skills to help communities solve their most pressing challenges.

The Aga Khan University is one of nine agencies in the Aga Khan Development Network, a group of private development agencies with mandates ranging from health and education to architecture, culture, microfinance, rural development, disaster reduction, the promotion of private-sector enterprise and the revitalisation of historic cities.